On July 26th the AT&T Pioneers and Down Memory Lane Scrapbook Store will partner a "Card A Soldier" event.

We'll have supplies and tools available for anyone to come in and make decorated cards to be sent to military persons serving in Iraq. The cards will be mailed to local Soldiers and Marines and also to Chaplains at various camps for distribution to troops. If you have an address for a military person, drop it by and we'll add it to our mailing list. All postage will be paid by AT&T.

There will be drawings throughout the day of gifts donated by various businesses and a grand prize at the end of the day (need not be present at time of drawing to win the grand prize). There will also be a special drawing for a gift basket for one of our military family members attending. A 15% discount will also be offered on any personal store purchases made that day by card makers.

Children are welcome with an adult. We'll have a table set up with supplies especially for them. Don't worry if you think you're not a "crafter", the cards are simple to make and we'll have folks on hand to help. Or come by and write messages on cards already made. We hope you'll drop by, and spend as much time as you like- enjoy visiting and show your support for our men and women serving in the Armed Forces.

CAMP FOSTER, Okinawa — The Marines of Combat Logistics Regiment 3 departed here for the Cobra Gold military exercise with no idea they would end up helping provide relief to thousands of cyclone victims.

When Cyclone Nargis tore across Myanmar on May 2, the Marines were preparing for the start of the annual Cobra Gold in Thailand.

But it didn’t take the unit’s 240 Okinawa-based Marines — most of whom have returned — long to switch gears from a combat-training posture to relief mode, working around the clock to provide pallets of supplies for the support effort, dubbed "Operation Caring Response."

On May 12, after delays caused by the reluctance of the Myanmar government to accept international assistance, a U.S. Air Force C-130 loaded with relief supplies was allowed to land in Rangoon. It was the first of 200 relief flights delivering more than 3.3 million pounds of much-needed supplies that the U.S. military would send into the country to assist international organizations providing relief.

Much more could have been accomplished, U.S. military officials said. Myanmar denied offers to use long-range helicopters to distribute supplies to the hardest-hit areas of the country and refused the assistance of the 31st Marine Expeditionary Unit and the USS Essex Ready Group, which was diverted to international waters off the coast of Myanmar for more than three weeks.

However, the Okinawa-based members of CLR-3 never let politics get in the way.

Read the rest of the article here.
Posted by Semper Fi Mom at 8:56 AM No comments:

Join us for the 4th on Broadway 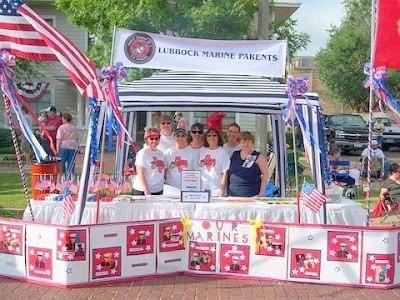 Join us for the 4th on Broadway street fair tomorrow. We'll have our cookbooks for sale and you won't want to miss them. :)

Have a Happy Independence Day!
Posted by Semper Fi Mom at 9:20 PM No comments: