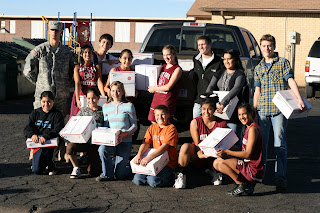 Special thanks goes to Michelle Johnson and her students at the Littlefield Junior High and Littlefield High School for their generous donation of care packages and letters to the troops of West Texas. In early December, I was contacted by Michelle, the Youth Services Coordinator, regarding their donations, and she explained that the student councils of Littlefield were having a little competition to see who could arrange for the most donations. The turnout was awesome, as they made the largest donation to Lubbock Marine Parents of any school. The care packs filled the bed of my F-150 and then some.

I could tell that the students took great pride in their efforts, their letters were very warm and neat. The care packages were all carefully labeled.

I visited with them a little bit about what we did at Lubbock Marine Parents and how I was just like them, a concerned citizen who wants to help out in supplying our troops with needed supplies and little comforts from home. To the students of Littlefield, thank you so much for your support!

These supplies were re-packaged with other donated supplies at the Lubbock Marine Parents annual packing party that was held on January 24, rather during Christmas. These supplies will go to troops who are stationed in Iraq and Afghanistan. Shipment of the supplies and letters of support will be made during the week of Feb. 8.

The students of Littlefield's Junior high and High Schools, stepped up and donated much of their time and efforts to produce care packages for the troops. On behalf of the moms and dads of Lubbock Marine Parents, we thank you from the bottom of our hearts! The troops will enjoy every bit of your hard work.


(In the top photo, Left (in uniform, Devane Amalla, a US Army combat medic who was recently deployed to Iraq; and the students of the Littlefield Junior High and high Schools who stayed after school in order to help load up the supplies.) Below: Letters from the students to the troops and the LMP Packing party in January. 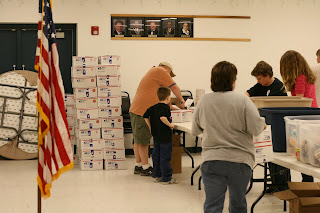 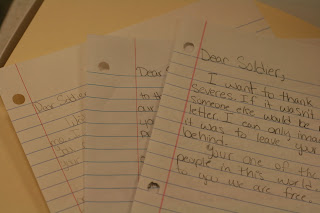