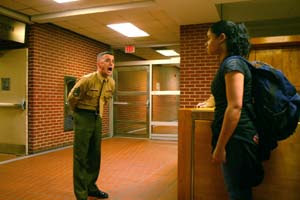 Staff Sgt. Antonio Soto, a senior drill instructor for Receiving, shouts at Rct. Anabel Santos, a new recruit, for not following instructions Dec. 4 at Receiving. Receiving is the first time many recruits are ever yelled at and forced to follow orders.

"You have arrived on Marine Corps Recruit Depot Parris Island," a drill instructor shouts. "You have taken the first step in becoming a United States Marine."

The recruits quickly run to the legendary yellow footprints.

"Look forward, feet at a 45-degree angle, thumbs along your trouser seams," Nelson shouts to them. "This is the only position you will be in when addressing a Marine, sailor or civilian during your stay on Parris Island."

Nelson isn't joking, but one recruit makes the mistake of laughing.

Nelson orders the recruits to line up and center on her silver doors, males on the right, females on the left.

The doors read, "Through these portals pass prospects for America's finest fighting force."

"You will only pass through these doors once," Nelson tells them. "Now get in and place your right hip against my desk."

The laughing recruit wasn't laughing anymore. She was shaking.

"Give me your last name, initials and the last four of your social," Nelson ordered.

"Santos," she said in a barely audible voice.

"Someone said whisper to me, huh," Nelson asked. "Shout!"

The volume still wasn't there, and several other drill instructors made their way to the quiet recruit.

She broke. Within 30 minutes of her arrival on Parris Island, Santos was crying.

The remaining recruits weren't doing much better. They were twitching, twiddling their thumbs and fighting back tears.

However, their initial encounter was not nearly as emotionally challenging as their short, to-the-point phone call home.

Several recruits were crying before they even picked up the phone.

"This is Recruit Keith Paley, I have arrived safely on Parris Island," Paley said. "I will notify you of my new address by mail in seven to nine days, thank you for your support and goodbye for now."

Although Receiving is a psychological and emotional roller coaster ride, its purpose is much simpler - prepare the incoming recruits for training.

"We take care of their initial processing," Soto explained. "They get their medical and dental appointments, clothing and paperwork completed here."

The recruits are also given lessons on drill and common courtesy.

"We try to teach them the basic skills of drill, customs and courtesies," Nelson said. "But our main goal is processing them into training."

One of those image-altering steps of processing is the male recruits haircut.

Everyone of them were given a grade-A recruit training haircut. No hair, no high and tight, no medium regulation, it was all skin.

The recruits were one step closer to uniformity. All they had left were their civilian clothes, and that would soon be dealt with.

A single-file line formed, and the recruits were given their initial issue.

Their initial transformation was complete, but it wasn't pleasant. However, there was a helping hand to support them.

Navy Lt. Jay Kersten, the chaplain for 3rd Recruit Training Battalion, was there to support the incoming recruits.

"I come here to give them advice on how to deal with the emotional and psychological transitions they have to go through," Kersten said. "I think the hardest part for many of them is the initial intensity of the drill instructors. It's like they hit a wall."

Santos was one of the recruits who needed that support and got it even though she wasn't in Kersten's Battalion.

Many of them, like Pfc. Dustin Johnson, a Dec. 7 graduate from 3rd Recruit Training Battalion's Lima Company, do graduate, but still remember the impact of their receiving experience.

It's difficult," Johnson said. "You have to learn fast and move fast or get blasted."