I guess I'm on a music kick with my postings lately. 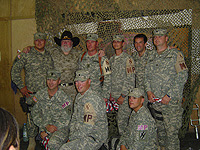 The Charlie Daniels Band has entertained the troops in Iraq and on May 16th, they are scheduled to perform a free concert at MCAS New River to honor the Marines and sailors of the Wounded Warrior Battalion-East. The concert, organized by the Spirit of America Tour, is open to active duty, reservists, retirees, DoD employees, their families, and guests. My second son is stationed there and is planning to attend. I know he will enjoy it.

Charlie Daniels has a great website (where I got the picture)and even a
Soap Box. Here is his latest Soap Box posting:

I think it was Shakespeare who said that a rose by any other name would
smell as sweet. Well political correctness and the stuff we shovel out of
the barnyard after the bulls have spent the night have a similar odor.

It is no longer politically correct to call the War in Iraq the War on
Terror and the reason for that is purely political and inspired by people
who for the most part don't want America to win the war in Iraq. And
in my book they are so low they could jump off a brickbat and commit suicide and just about as dumb as a box of sand gnats.

I know that we are being led to believe that if we'll just leave Iraq the
war will be over and all will be lovely and sweet and we'll leave all the
Islamic terrorists in Southwest Asia.

These Islamic terrorists are not just committed to winning the war in
Iraq, they are committed to wiping America and Israel off the face of the earth and they sure can't do it by running us out of Iraq.

Well folks let me tell you something. I¹m afraid that we're going to find
out who is right about this situation because I think a combination of
self serving politicians allied with an irresponsible and anemic media is
going to force us to bring our troops home before we get the job done in Iraq.

And the problem is that once we do that and find out that we were wrong.
When the oil in the Middle East is controlled by radical islamics,
when the flower children politicians weaken homeland security, when Iran
blackmails the world with a nuclear weapon it will be too late.

Nancy Pelosi, Harry Reid, Teddy Kennedy, Joe Biden, Barrack Obama, John
Edwards, Dennis Kucinich. Remember these names and when it all goes to hell you can send them and their ilk a thank you
note.

Serious business needs serious people not dingaling politicians with
their heads in the clouds.

Pray for our troops.

What do you think?

Charlie Daniels
Posted by Semper Fi Mom at 11:42 AM