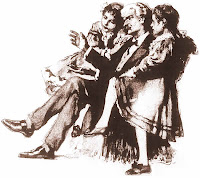 "I cannot think of any need in childhood as strong as the need for a father's protection."
-- Sigmund Freud

"If the new American father feels bewildered and even defeated, let him take comfort from the fact that whatever he does in any fathering situation has a fifty percent chance of being right."
-- Bill Cosby


"A new father quickly learns that his child invariably comes to the bathroom at precisely the times when he's in there, as if he needed company. The only way for this father to be certain of bathroom privacy is to shave at the gas station."
-- Bill Cosby


"Be kind to thy father, for when thou wert young, Who loved thee so fondly as he? He caught the first accents that fell from thy tongue, And joined in thy innocent glee."
-- Margaret Courtney


"I talk and talk and talk, and I haven't taught people in 50 years what my father taught by example in one week."
-- Mario Cuomo


"I watched a small man with thick calluses on both hands work fifteen and sixteen hours a day. I saw him once literally bleed from the bottoms of his feet, a man who came here uneducated, alone, unable to speak the language, who taught me all I needed to know about faith and hard work by the simple eloquence of his example."
-- Mario Cuomo


"A father is a guy who has snapshots in his wallet where his money used to be."
-- Unknown

"A king, realizing his incompetence, can either delegate or abdicate his duties. A father can do neither. If only sons could see the paradox, they would understand the dilemma."
-- Marlene Dietrich


"Fifth Commandment: Honor thy father and thy mother: that thy days may be long upon the land which the Lord thy God giveth thee."
-- Exodus 20:12

"My father always told me, 'Find a job you love and you'll never have to work a day in your life.' "
-- Jim Fox


"The father is always a Republican toward his son, and his mother's always a Democrat."
-- Robert Frost

"A father is a banker provided by nature."
-- French Proverb


"Any man can be a Father but it takes someone special to be a dad."
-- Anne Geddes

"My father died many years ago, and yet when something special happens to me, I talk to him secretly not really knowing whether he hears, but it makes me feel better to half believe it."
--Natasha Josefowitz

"The father of a daughter is nothing but a high-class hostage. A father turns a stony face to his sons, berates them, shakes his antlers, paws the ground, snorts, runs them off into the underbrush, but when his daughter puts her arm over his shoulder and says, 'Daddy, I need to ask you something,' he is a pat of butter in a hot frying pan."
-- Garrison Keillor

"When I was a kid, I said to my father one afternoon, 'Daddy, will you take me to the zoo?' He answered, 'If the zoo wants you, let them come and get you.'""
-- Jerry Lewis

"Small boy's definition of Father's Day: It's just like Mother's Day only you don't spend so much."
-- Unknown

Blessed indeed is the man who hears many gentle voices call him father!
~Lydia M. Child, Philothea: A Romance, 1836

When I was a boy of fourteen, my father was so ignorant I could hardly stand to have the old man around. But when I got to be twenty-one, I was astonished at how much he had learned in seven years.
~Mark Twain, "Old Times on the Mississippi" Atlantic Monthly, 1874

Old as she was, she still missed her daddy sometimes.
~Gloria Naylor

Thanks for all you do Dads! Hope your Father's Day is very special.
Posted by Semper Fi Mom at 1:20 PM

Email ThisBlogThis!Share to TwitterShare to FacebookShare to Pinterest
Labels: Fathers