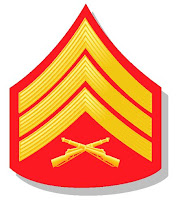 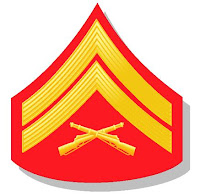 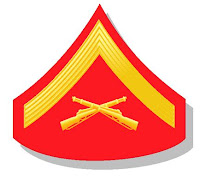 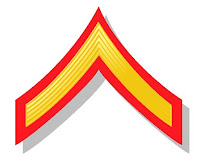 The enlisted rank structure is something our Marines memorize very quickly at bootcamp if they haven't already during their time in the delayed entry program. Some of us parents, however, need a little help in this area. I'm including myself in that. I remember when my oldest son was first talking to the recruiters and mentioned a Gunny so and so. I thought it was some sort of nickname. I had no idea it was a rank, well actually a nickname for a rank I guess. Marines are very forgiving when parents call them by the wrong rank, but we don't want to do that if we can help it, right?

Enlisted Marines with pay grades of E-4 and E-5 are considered Noncommissioned Officers (NCOs) while those at E-6 and higher are considered Staff Noncommissioned Officers (SNCOs). The E-8 and E-9 levels each have two ranks per pay grade, each with different responsibilities. Gunnery Sergeants (E-7) indicate on their annual evaluations, called "fitness reports", or "fitreps" for short, their preferred promotional track: Master Sergeant or First Sergeant. The First Sergeant and Sergeant Major ranks are command-oriented, with Marines of these ranks serving as the senior enlisted Marines in a unit, charged to assist the commanding officer in matter of discipline, administration and the morale and welfare of the unit. Master Sergeants and Master Gunnery Sergeants provide technical leadership as occupational specialists in their specific MOS. First Sergeants typically serve as the senior enlisted Marine in a company, battery or other unit at similar echelon, while Sergeants Major serve the same role in battalions, squadrons or larger units. The Sergeant Major of the Marine Corps is a rank conferred on the senior enlisted Marine of the entire Marine Corps, personally selected by the Commandant of the Marine Corps.


Unlike other branches of the military, it is incorrect to refer to enlisted Marines above the rank of Sergeant as "Sergeant". For instance; even informally, a Marine Staff Sergeant will be called "Staff Sergeant Jones" rather than "Sergeant Jones". Similarly, Lance Corporal is never shortened to "Corporal" when addressing a Marine of this rank, nor is a Private First Class properly addressed as Private as he or she would be in the Army, instead "PFC" will be used. However, familiar terms such as "Gunny" (for Gunnery Sergeant), "Top" (for Master Sergeant; 1stSgt's are not referred to as "Top") and "Master Guns" (for Master Gunnery Sergeant) are often substituted. These nicknames are improper for formal situations and can be taken as disrespectful if the Marine using them is not familiar with the Marine being addressed. The term "Sarge" is universally disrespectful among Marines.

Emphasis mine. Find the rest of the rank insignia and more info at Wikipedia.
Posted by Semper Fi Mom at 7:06 PM