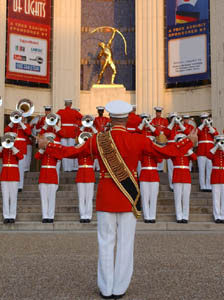 Master Gunnery Sgt. Mark Miller, U.S. Marine Drum and Bugle Corps drum major, conducts the unit at the grand opening of the State Fair of Texas, Sept. 28. The Drum and Bugle Corps, or “The Commandant’s Own,” made its 42nd annual appearance at the fair, performing for thousands, more than three times each day, from Sept. 28 through Oct. 12. Photo by: Cpl. John J. Parry
Oct. 12, 2007; Submitted on: 10/17/2007 04:33:52 PM ;
Story ID#: 20071017163352
By Cpl. John J. Parry, Marine Barracks 8th & I
MARINE BARRACKS WASHINGTON (Oct. 12, 2007) -- Everything is bigger in Texas, as the saying goes, so when the organizers of the State Fair of Texas needed a military musical unit, they called one of the biggest and best known – The U.S. Marine Drum and Bugle Corps.“The Commandant’s Own,” making its 42nd annual appearance, answered the call and performed at the State Fair of Texas, in Dallas, Sept. 28 through Oct. 12.The grand opening for the biggest fair in the country began with a parade on Main Street, with the Drum and Bugle Corps leading the way. The unit marched past magnificent skyscrapers and sidewalks lined with enthusiastic crowds. Along the way, they played hallmark songs of the Marine Corps, such as the “Marines’ Hymn” and the official march of the Marines, “Semper Fidelis.”“They don’t even flinch,” said Klyde Knudson, an Army veteran of World War II and the Korean War. “I get tears in my eyes when I see the precision of these Marines.” Once the opening day parade was complete the Drum and Bugle Corps continued on to the fair grounds where they would perform throughout the next two weeks. The Marines in their red dress uniforms began each day with a march under the blistering heat of the Texas sun to Marine Corps Square. The Drum and Bugle Corps’ cadence echoed throughout the fair grounds on their way to play concerts at the square. At the site, located on the west side of the fair, just over 1,000 patriotic fans came each day to see the Marines in action.During each performance, “The Commandant’s Own” played a large variety of songs that include classics, such as the official march of the United States, “The Stars and Stripes Forever,” by John Phillip Sousa and present day popular music heard in movies and on the radio.For Jeannie Bush, a native of Dallas, she thought the modern songs played, such as James Blunt’s “Your Beautiful,” were great. However, it was the patriotic songs she held closest to her heart.“I get excited because it’s not everyday we see Marines in Texas,” Bush said. “Songs like the national anthem and “The Battle Hymn of the Republic” remind me of all those who are fighting to keep our nation safe.”Midway through each performance, Chief Warrant Officer Brian Dix, the director of “The Commandant’s Own,” would educate the crowd about the history of the Marine Corps and the unit.“What are those badges you’re wearing?” asked a member of the audience.“They’re not badges, they’re medals,” said the smiling Dix, creating an uproar of laughter among those in attendance. “Unit citations go over the right side and personal decorations over the heart,” he said. For being good sports, the audience members were awarded a CD with music of the Drum and Bugle Corps. “Come on and let these Marines know what a Texas audience sounds like!” Dix would say, and without hesitation, the audience would rise and let out a deafening applause.Upon completion of each concert, the Marines marched to the Hall of State, a National Historic Place that commemorates the rich history of the Lone Star State, for Evening Retreat. The patriotic people of Texas never failed to stand proudly and place their hand over their hearts in respect of the national anthem and the retirement of the colors each day. After Evening Retreat, the unit took its rightful place leading the Starlight Parade. The parade passed some of the most symbolic features on the grounds, including the Cotton Bowl, North America’s tallest ferris wheel, standing at 212 feet, and the birthplace of the corny dog. In 1961, Jim Skinner, the director of special events, invited “The Commandant’s Own” to open the fair and enjoyed the Marines so much, he fought to get them back to the grounds. In 1965, his persistence was rewarded when the Drum and Bugle Corps came back and was back to stay!“I think they are an outstanding unit that reflects well to the Marine Corps,” said Ray Landin, retired Marine Chief Warrant Officer 4 and the current director of special events. “We never have anything to worry about with the Marines. They consistently come out here and give the audience the same great performance each day.”With the hard work of the U.S. Marine Drum and Bugle Corps each day, the unit helped make the State Fair of Texas special for all those who came to watch. The people of Texas showed the Marines with their big applauses how much they appreciate and value their service to their country.
Source

And here's a great video about the Marine Drum and Bugle Corps.