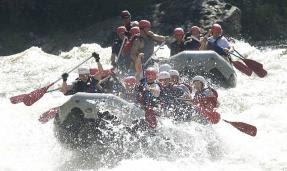 FAYETTEVILLE, W.Va. — The Marines are this year’s Wilderness Challenge champs.

A four-person team comprising leathernecks stationed all around the country ended the competition Saturday with a first-place showing in the two-day event’s final (and arguably most punishing) race: a 14-mile, largely uphill slog through West Virginia’s share of the Appalachian Mountains. They knocked it out in 2 hours and 26 minutes.

The Wilderness Challenge, now in its seventh year, is billed as a team outdoor adventure competition for all five branches of the armed forces.

The event is held each fall along the New and Gauley rivers in southern West Virginia, about an hour south of the state capital, Charleston. It consists of six races spanning nearly 60 miles overall: one on bikes, two on foot and three in the water.

Saturday’s competition began at 7:15 a.m., soon after sunrise, and ended with an awards presentation more than 12 hours later.