I am so glad to see this article. I am not a Time Magazine reader, but happened to see this particular issue in the library. I saw the Osprey on the cover and because one of my sons is in an Osprey squadron, I was curious about it and read it. It was extremely negative. I came home and started searching on the internet and found lots of blogs talking about the Osprey in a very negative way too. When I next talked to my son I asked him about the points that the article made. He said most of them were either outright wrong or dated. One of the blog posts I read even stated that the prop wash from the Osprey would rip a Marine's clothes right off of him and that the Osprey wasn't equipped to fly into clouds. My son has been in the Osprey while it was flying through clouds, so I knew right off that that part wasn't true. He also works with Ospreys every day and has NEVER heard of any one's clothes being ripped off. Where did that even come from? Just made up on the spot by the blog author? I didn't know enough to put together a whole blog post about it and answer all the accusations, so I was thrilled to find this article. Be sure and read that last paragraph. 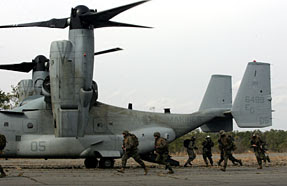 The Corps’ MV-22 Osprey tilt-rotor aircraft will crash eventually, and Marines will die. That much is certain. The same can be said of virtually every aircraft in the military inventory.

Marine officials conceded the point in the wake of an eight-page Oct. 8 cover story in Time magazine titled “A Flying Shame.” The article highlighted the Osprey’s checkered past and called into question the capability, safety, economy and wisdom of fielding an aircraft that hovers like a helicopter and flies like a plane on the eve of its combat debut in Iraq.

The Time article describes how “narrow interests” kept the Osprey alive in Congress despite schedule and cost overruns throughout its 25-year development. It tells how specifications were modified — and eliminated — as the prototypes failed to meet them. Ultimately, the article says the Corps is putting Marines’ lives in “jeopardy” by putting them in the Osprey.

But what the article leaves out, said senior Marine leaders, civilian and military aviation experts, a Washington think tank and at least one of the “critics” quoted by Time, is the aircraft’s true status.

‘Sensationalistic view’
In an official letter to the magazine dated Oct. 1 and obtained by Marine Corps Times, Assistant Commandant Gen. Robert Magnus wrote that reporter Mark Thompson’s story “serves up a one-sided, sensationalistic view of the program, full of inaccuracies, and misleading to Time’s readers.”

“It is sad that Time’s story failed to include the fact that in the past six years, the [Osprey] program had the most extensive technical and programmatic review in the history of aircraft,” Magnus wrote. “The cover and the story, including dated material, was neither balanced nor accurate.”

Attempts to reach Thompson were unsuccessful. An automated response generated by his e-mail account said he was on leave until Oct. 15. Daniel Kile, a spokesman for the magazine, said, “Time stands behind the story.”

Meanwhile, the critics are having a field day with the piece, deconstructing its assertions point-by-point on blogs, in newsletters and even in an official “information paper” prepared by Marine officials. The question on many minds is, simply, do Thompson and Time magazine fully understand the mission and purpose of this new kind of aircraft?

Lack of autorotation
Take, for instance, the lack of an autorotation capability. If a helicopter loses its engines and begins to fall, the upward push of air on the unpowered rotor blades keeps them spinning fast enough to bring the bird down in a jarring, but survivable, landing. This autorotation is a standard requirement for helicopters. But the Osprey can’t do it, which Time considered a flaw.

But as Marine officials note, the Osprey is not a helicopter.

The hybrid, “though worse at autorotation than most helicopters, also has a glide landing capability that no helicopter possesses,” wrote Maj. Eric Dent, the Corps’ aviation spokesman, in an information paper about “inaccuracies” in Time’s article.

The Osprey has unusually thick wings, which give the aircraft lift at very low air speeds and allow it to glide at speeds as low as 40 knots. A hovering Osprey doesn’t need to fully convert to airplane mode to leverage this advantage. A small tilt on the nacelles does the trick, allowing the bird to glide to the ground as well as, if not better than, other fixed-wing aircraft, Walters said.

The autorotation wording was dropped from the requirement in 2004, when Corps officials changed it to say only that the Osprey must perform a survivable emergency landing in the event both engines are lost.

Time described the change as a failure by engineers to rewrite the laws of physics.

Weaponry
There’s also the issue of defensive weaponry. The Ospreys that press reports say are now operating in Iraq, all with Marine Medium Tiltrotor Squadron 263, are equipped with M240G medium machine guns pointed out the back ramp, ready to spray hundreds of 7.62mm bullets into a hot landing zone.

Retired Gen. James Jones, former commandant of the Marine Corps, told Time he’d always wanted the Osprey to have a forward-mounted gun, a .50-caliber under the nose — something he never pulled off as the Corps’ top Marine.

Jones thinks all assault support aircraft should have forward-facing weaponry, according to the article. He described it to Time as a fundamental belief stemming from his Vietnam War experience: Biggest and baddest is best. A spokesman from Jones’ office said the retired general was unavailable to comment for this article.

The Time article quoted Jones as saying, “A rear-mounted gun is better than no gun at all, but I don’t know how much better.”

But Walters said the Osprey’s rear machine gun is the same weapon system the Corps has in every assault support aircraft, none of which has guns facing forward.

Over the past five years, side gunners firing from CH-46 Sea Knight and CH-53 Sea Stallion helicopters in Iraq and Afghanistan “found that most of the threat was on the ramp,” Walters said.

He said Jones wasn’t the only Marine to stand by a forward gun on principle.

“It’s an emotional issue for a lot of people,” Walters said. “I can come up with a scenario where it would be valuable, but we haven’t seen it in five years of combat.”

That doesn’t necessarily rule out more firepower in the future, though. The Marine Corps has allocated funds to pursue a forward-firing, “all-quadrant gun,” Walters said.

A prototype of such a weapon was displayed last week at the Modern Day Marine Expo in Quantico, Va. That weapon, the Remote Guardian System developed by international defense contractor BAE Systems, could be hard-wired into the Osprey’s avionics and deliver accurate, sustained fire throughout the entire flight envelope, according to a corporate release.

Performance problems
The Time article also said a 2006 incident — described by military officials as an uncontrolled takeoff — was the apparent result of a computer glitch that caused an Osprey to rise 25 feet into the air “on its own” before crashing back to earth. The article goes on to cite the example as just one in a series of problems throughout the Osprey’s development, including a “flawed computer chip” and “bad switches.”

But Corps officials insist the 2006 incident had nothing to do with computer malfunction. It was a maintenance mistake, Dent said.

“Two wires were accidentally cross-connected when reinstalled after maintenance,” he said. “There was neither a design problem, nor a software glitch.”

But that’s not to say the Osprey hasn’t had performance problems.

“Nobody has ever sent an aircraft that combines the characteristics of an airplane and a helicopter into combat before, so of course you’re going to have development challenges that you wouldn’t encounter on a more conventional airframe,” said Loren Thompson, vice president of the Lexington Institute, a Washington think tank. Thompson, who is no relation to Time’s reporter, has followed the Osprey program closely over the years and posted a scathing rebuttal to the Time piece on Lexington’s Web site.

“Whatever you may think about the way the Marine Corps has gone about developing the [Osprey], the notion that it would deliberately field a dangerous or an inadequate airplane is simply preposterous,” he said.

A report from the Defense Department’s Director of Operational Test and Evaluation in 2000 found the Osprey operationally effective but not operationally suitable, according to Time. Walters said that the article doesn’t mention, however, the August 2005 report by the same office that gives the Osprey thumbs up in both columns.

“You could have written that article in 2003,” Walters said of the Time piece. “It didn’t acknowledge the really good work that has happened over the last four or five years.”

In a blog about his appearance in the article, Military.com editor Ward Carroll, who spent three years as the Osprey’s spokesman, wrote that Time sensationalized his concern that as many as six aircraft might crash during the Osprey’s first year in combat.

Carroll wrote that he spent a half-hour on the phone with Time’s Mark Thompson talking about the aircraft’s potential, “including my belief that the airplane really could change everything in terms of how the Marine Corps fights.”

“Thompson left out the part where I indicated my support and hopes for VMM-263’s success and resultantly I am presented as a ‘critic,’ ” he wrote. “That’s what I get for attempting a complete thought with a reporter who’s reverse-engineering a story.”

Carroll — who wrote that the article’s title, “A Flying Shame,” is “a pretty good indication of the writer’s thesis” — isn’t alone in taking umbrage at the story.

“The article goes over issues that are old, long-since addressed, and it is a fundamentally inaccurate assessment of the [Osprey],” said Jack Satterfield, program spokesman for Osprey manufacturer Boeing.

Walters expressed disappointment over negative attention caused by inaccuracies published in Time, which circulates more than 3 million copies weekly, because he doubts whether vindication will be as public.

“The first time this thing picks up a wounded soldier or Marine and gets him the medical attention that saves his life because of speed and range, you’ll never hear about it,” he said.