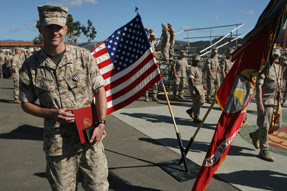 The snipers could tell the mortar team was close.

Both heard the unnerving sound of an explosive round exiting the mortar tube and immediately ran into the Fallujah, Iraq, street to get the 30 other Marines bogged down with them to scramble for cover.

Two mortars bracketed the leathernecks — one falling behind and another in front — before one mortar exploded a few feet away, blowing Sgt. Chad Cassady through a door and into a courtyard. Cpl. Russell Scott collapsed in the street, peppered with shrapnel in his leg and buttocks, along with a bullet hole in his arm.

Scott desperately tried to crawl into a nearby building, as insurgents’ bullets and mortars rained down on him. Cassady was still lying in the courtyard with shrapnel lodged in his chest and legs, his right lung collapsed, and his liver and kidneys lacerated.

“All of a sudden, [Cassady] came flying out of the smoke and dust and grabbed me,” Scott said of his sniper team leader with 3rd Battalion, 1st Marines. “He dragged me to the building and then ran back out for the others.”

Almost three years after that November 2004 afternoon during the second Battle of Fallujah, now-2nd Lt. Cassady was awarded the Silver Star — the nation’s third-highest medal for combat bravery — for “repeatedly exposing himself to save the lives of several wounded Marines who were trapped in the open,” according to the award citation.

After Cassady dragged Scott into the building’s kitchen, he limped back out and carried in three more leathernecks. As the sniper tried to carry in a fourth, he passed out from blood loss, and Staff Sgt. Christian Erlenbush had to carry Cassady off the street.

Cassady was immediately airlifted to Baghdad, where he was rushed into emergency surgery that saved his life.

“You can’t just lay down,” said Cassady, now the platoon commander for Golf Company, 2nd Battalion, 5th Marines. “If they stayed out in the street when rounds were coming down, they were going to die.”

He was presented the medal Oct. 17 on the 5th Marines’ parade deck at Camp Pendleton, Calif., after returning from his third deployment to Iraq.

Col. Willy Buhl, 3/1’s battalion commander in 2004, said he and other Marine Corps and Navy officials were disappointed in how long it took for Cassady to receive the medal.

“The secretary of the Navy said that it was Chad’s case that convinced him that he should [delegate] awards like this to the commandant,” Buhl said. “It bothered him and [he] said it was unsatisfactory. Chad was a catalyst for positive change.”

Cassady, 33, one of the older second lieutenants in the Corps, didn’t enlist until he was 26 and had already earned bachelor’s and master’s degrees in political science.

“If you would have asked me what I was going to be when I was 18, I definitely wouldn’t have said a Marine. But after I finished school, I looked at the world differently,” he said.

Buhl said he immediately recognized how Cassady stood out from the other snipers with 3/1.

“When he says something, it’s powerful,” Buhl said. “He knows what he is going to say before he opens his mouth. He got my respect and [that of] the men around him.”

While Cassady was overcoming his injuries, Buhl encouraged him to seek a commission. Cassady was accepted to Officer Candidate School, and despite discomfort from shrapnel still lodged in his intestines, he completed both OCS and the Basic School on time.

Three years after the mortar attack that nearly killed him, Cassady said hearing he’d been awarded the Silver Star left him thinking about the Marines with him who didn’t come back.

“It’s a bit overwhelming,” Cassady said. “It brings back a lot of memories and faces, like the Marines I grew up with that lost their lives in Fallujah.”
Source
Posted by Semper Fi Mom at 10:50 AM