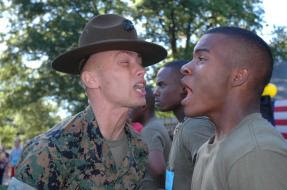 For a little while there, even the commandant had his doubts about whether the Corps could grow the active-duty ranks by 5,000 Marines in the nine months following a December 2006 Defense Department announcement that the service would have to swell to 184,000 Marines by the end of the fiscal year on its way to 202,000 through 2011.

In a May 17 letter to all the Corps’ generals, Commandant Gen. James Conway warned that the growth “is not progressing according to plan” and admonished them to redouble their retention efforts and limit administrative separations wherever possible.

It worked. Within days of crossing into the new fiscal year, Corps officials announced Oct. 4 that they’d managed to exceed the target growth by 2,000 Marines, bringing the Corps’ current active-duty end strength to 186,000 by the time fiscal 2007 ended Sept. 30.

One recruiting official said the Corps exceeded its mission of shipping 35,576 Marine hopefuls — roughly 2,600 more than projected before the growth announcement — to boot camp during fiscal 2007. It happened, in part, by putting 400 more recruiters in the country’s high schools and strip malls, and there are plans to add another 200 in fiscal 2008.

More recruiters should lead to more recruits, which would require barracks construction at the Corps’ basic training depots, which would increase the boot camps’ through-put capacity, which would strain the staff at military occupational specialty schools, Marine officials said.

As a result, 1,250 Marines from fiscal 2007’s growth will be added to manning levels throughout the entry-level training pipeline, officials said.

The recruiting official said Marine Corps Recruiting Command entered fiscal 2008 with 41 percent of the annual shipping mission already signed up and awaiting a ride to the yellow footprints. That’s down slightly from the 50 percent MCRC typically likes to carry forward into a new October, and part of the recruiting command’s efforts in fiscal 2008 will be focused on raising that number for fiscal 2009, the official said.

Neither recruiting nor retention officials offered hard numbers concerning the extent to which their goals were exceeded. For their part, retention officials said they re-enlisted 31 percent of first-term Marines in the eligible population during fiscal 2007. That’s up from 22 percent in fiscal 2006, when Corps planners kept end strength constant.
Source
Posted by Semper Fi Mom at 9:00 AM