Troops unite to save soldier knifed in head 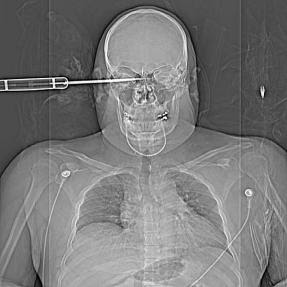 Courtesy of Lt. Col. (Dr.) Richard Teff / Army An X-ray revealed that the knife entered just below Powers' helmet, above his cheekbone. It also penetrated his cavernous sinus, where a bundle of veins supplied blood to his brain's right side.

It felt like a nasty sucker punch. Yet when he strained his eyes to the hard right, there was something that didn’t belong: the pewter-colored contour of a knife handle jutting from his skull.

Sgt. Dan Powers, stabbed in the head by an insurgent on the streets of East Baghdad, triggered a modern miracle of military medicine, logistics, technology and air power.

It required extraordinary hustle from a string of ground medics, air medics, C-17 pilots, jet refuel technicians and more. Not an hour after the attack, Powers, a squad leader with the Army’s 118th Military Police Company, was draped in sheets on a medical gurney bound for Balad Air Force Base, about 30 minutes away by helicopter.

Someone pressed a phone to his left ear so he could promise his wife, in a panic worlds away, that everything would be fine. He would soon drench a surgeon’s hands in blood, narrowly surviving as a medical team opened his skull to extract 4 inches of blade from his brain.

These are the staggering measures that allowed Powers to keep his promise and his life.

The attack
East Baghdad is a crumbling maze. Narrow lanes form stucco canyons that block out sunlight. A grimy film seems to blacken every surface: the facades, cobbled footpaths and street urchins’ faces. Lines of sight end at each bend in the street, and the windows overhead look down like hundreds of eyes.

A 12-year Army vet on his second deployment to East Baghdad, Powers spent his days training local police and trying to keep peace in a fortified cityscape. Soldiers in his 13-man squad would cruise the city’s oldest quarter with Iraqi officers conducting street-level investigations and responding to gunfire or explosions.

Nothing was different July 3 — at least not at first.

Powers was dispatched from Forward Operating Base Shield to a stretch of bomb-charred road. Explosive ordnance disposal personnel were already huddled over a blast site near Beirut Square on one of the district’s wider thoroughfares. The explosion seemed minor — no flaming vehicles, at least — so Powers and a team leader, Sgt. Michael Riley, were mostly concerned with warding off pedestrians.

Powers was walking away from the cordoned area when it hit him — a near-knockout blow that felt like a “clothesline tackle,” he said. But Powers stayed on his feet, spun around and slammed his raven-haired assailant to the asphalt, prodding the skinny Iraqi man’s face with his M4 barrel. Riley, his squad mate, pounced and detained the assailant.

“I remember being pretty pissed off,” Powers recalled to Air Force Times. Adrenaline throbbed in his veins and blood soaked his shoulder. A medic, Spc. Ryan Webb with the 118th Military Police, was tugging at his arm, demanding that he “sit down, calm down and leave the knife in.”

The knife? What knife?

“They said, ‘You’re stabbed’ and ... I remember seeing the handle,” Powers said. “There was no pain because the brain has no pain sensory nerves. It was all surface, like someone punched me in the head.”

Powers stayed conscious as soldiers carried him to a Humvee, sped to Forward Operating Base Shield and, after medics bandaged his head in clumps of cottony gauze, shuttled the sergeant to Baghdad’s Green Zone.

Stabbings of American military personnel in Iraq or Afghanistan are extremely rare, outnumbered by drownings, strokes, cancer, drug overdoses and electrocutions. According to Defense Department casualty reports, Powers is only the second service member stabbed while supporting Operation Iraqi Freedom.

The hospital
They spoke through the roaring chukka-chukka of rotating chopper blades.

Moments before medics slid Powers into a helicopter en route to Balad, his wife, Trudy, was patched through on a cell phone. A soldier held it to Powers’ face as his gurney rolled across the Green Zone helipad.

“His head was wrapped up with big, bulky bandages,” Teff said, “like the people transporting him were afraid the knife would get bumped or dislodge.”

It was less than two hours since the attack.

Balad’s head and neck team was accustomed to gory head wounds, skulls split by bullets and IED-borne shrapnel. But Powers’ injury “had to be the most amazing thing anyone in the room had ever seen,” Teff said. An X-ray revealed that the knife entered just below Powers’ helmet, above his cheekbone, “skating right along the base of the cavity we call the temporal fossa, where the temporal lobe of your brain lives,” Teff said. It also penetrated his cavernous sinus, where a bundle of veins supply blood to the brain’s right side.

Teff and Martin hit a crossroads. They could riskily retract the brain to isolate and clamp the artery in his cavernous sinus. Or Teff could cross his fingers and pull.

“Any time you have a penetrating stab to the head,” he said, “the biggest concern is what’s going to happen when you pull [the knife] out.”

“He started bleeding like crazy, enough to make everyone in the room worry he might die,” Teff said.

The doctors scrambled to find the nicked carotid artery. Plastic air hoses sucked out pint after pint of hot blood. Finally, they clamped the artery and relief washed over the medical team as the bleeding stopped. Though Powers had lost about 2 liters of blood — roughly two-fifths of his body’s total volume — the most dangerous part of the operation was over.

Through personnel at Walter Reed Army Medical Center in Washington, D.C., Teff relayed details and photos of Powers’ surgery to Lt. Col. Rocco Armonda, one the Army’s most skilled vascular neurosurgeons. There was no precedent for Powers’ condition in Iraq, and the head and neck team needed guidance.

Contacted in his vehicle, Armonda pulled over in Washington traffic, reviewed the images on his laptop and shot back a response: Close the guy up and get him to Bethesda. Now.

Evacuation
Capt. Corbett Bufton, an aircraft commander with the Charleston-based “Red 7” aircrew, was incredulous at first. Awaiting takeoff from Al-Udeid Air Base in Qatar, his airmen had expected to carry two Stryker anti-tank missile carriers to another airfield within Central Command — a job typical of their intratheater transportation role.

But the operations center was telling him to change planes, directing him toward a different C-17 Globemaster, one with a plus-sized fuel tank. Red 7, the center said, would be picking up a severely injured soldier from Balad to fly him nonstop to Andrews Air Force Base, Md., just outside Washington.

“Our initial reaction was, ‘I don’t believe you,’” Bufton said. “Nobody goes to Andrews Air Force Base from Balad.”

Once the disbelief faded, Bufton sent a few guys to the barracks to scoop up extra clothes.

“It looked like we’d be gone for a couple days,” he said.

After landing at Balad, the loadmaster, Staff Sgt. Matthew Nemeth, began readying the aircraft for a medical evacuation. They briefed him on the details: one guy with a knife in his head, another soldier with a gunshot wound to the neck added at the last minute. A seven-person medical crew expected to board soon. Keep down the turbulence and restrict the cabin pressure to 4,000 feet.

“I’ve never seen it that low before,” Bufton said. “That restricted our flight ops to about 26,000 feet, which unfortunately keeps us down in the weather.” At the time, thunderstorms blanketed the skies of eastern Europe along the flight path.

On the ground, a diplomatic clearance shop was frantically clearing their flight through roughly a dozen countries: Iraq, Turkey, Bulgaria, Romania, Hungary, the Czech Republic, Germany, Holland, England and others.

Over the Atlantic, it was Independence Day.

And as the C-17 rushed westward ahead of the rising sun, Nemeth helped the medical crew tack American flags on the walls and catwalk.

The C-17 touched down lightly at Andrews after a 13-hour flight. Powers and the other soldier were hurried to Bethesda. And members of Red 7, suffering in Iraq’s convection oven heat when they began their shift, stepped off the C-17 into D.C.’s balmy summer. The next morning, they flew into Dover Air Force Base, Del., picked up 17 pallets of cargo and headed back to Qatar.

“I’ve probably done two or three dozen medevacs in my career,” Nemeth said. “This one is probably the most significant, the most profound.”

More surgery
At Bethesda, a neurosurgical team guided by Armonda coiled Powers’ carotid artery and performed a cranioplasty on his dented skull. Trudy Powers met frequently with the surgeons, insisting each time on the raw truth.

“Don’t think I can’t handle it,” she told them.

Initially, they feared Powers, still in critical condition, could wake up with severe paralysis, brain damage and lost eyesight. But when the soldier surfaced after four comatose days, a battery of tests proved the stabbing had not robbed his intelligence or memory. Only his balance was badly skewed.

“It was like a dream because of all the stuff they had me on,” Powers said. “A face came in and said, ‘Do you know where you are?’ I said, ‘Are you kidding me?’ It was the best place I could possibly be. The president goes there, all the chiefs and Congress.”

Powers was released from Bethesda just a month later and allowed to return to his house roughly 30 miles from Fort Bragg, N.C. After months of physical therapy, physicians now believe his coordination is largely restored. Pending the success of a follow-up skull repair in January, Powers hopes to rejoin his unit as a squad leader before May.

“Certainly there have been bigger injuries, uglier, more devastating injuries,” Teff said. “What makes this unique is how huge the knife was, how well neurologically he’s doing and the drama involved in getting him back.”

Back at Fort Bragg
The package’s return address read “BALAD AIR BASE, IRAQ.” Trudy Powers, standing with her husband in their home, was tearful, trembling and mortified by the contents she expected to find inside.

Out plopped a hunk of stainless steel resembling a flea market dagger.

Army judge advocate general prosecutors later asked if they could have it. Powers didn’t mind. Iraqi prosecutors wanted to present the 9-inch blade as evidence during his attacker’s trial in Baghdad, which admitted Powers’ testimony via teleconference. He’s unsure of the man’s fate, though he was told the Iraqis planned to “lengthen his neck a little bit.”

Powers acknowledges that his survival tale, circulating within the Air Force’s Air Mobility Command, is “the stuff they make movies out of.” But the soldier in him bristles at the notoriety — or the suggestion that he’s some kind of hero.

In his version of the story, the Army, Navy and Air Force moved the world to save one man’s life.

And he’s just some guy who got stabbed in the brain.

Related reading:
Another survivor’s story: “No way I’m going to let this guy die”
Source
Posted by Semper Fi Mom at 8:30 AM